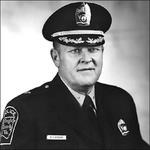 STOVER WILLIAM K. STOVER William K. "Smokey" Stover, the longest serving Chief of Police for Arlington County, died one year ago today, April 17, 2020 at the age of 89. A native of the Shenandoah Valley, he was drafted into the U.S. Army during the Korean War where he earned two Bronze Medals for acts of valor in combat. Following his discharge from the military, he attended business college in Harrisonburg, Virginia, then joined the Arlington County Police Department in 1956. He rose through the ranks while continuing his education in law enforcement at the Federal Bureau of Investigation Academy, Northwestern University, and American University. In 1998, he retired after 40 years of service, the last 18 years as Police Chief. Chief Stover took pride in the professionalism of the Arlington Police Department and considered its officers and staff "family." He embraced new ideas for innovative approaches to community-oriented policing in order to further understanding and coop- eration between the police and the neighborhoods they served. Under his leadership, the department was the first in the Common- wealth of Virginia to earn both state and national accreditation from the Commission on Accreditation for Law Enforcement Agencies. He mentored many in the region's law enforcement community and was instrumental in the construction of the Northern Virginia training academy for police officers. He played a leadership role in the creation of the Washington Metropolitan Area Drug Enforcement Task Force and served as Chairman of the State Board of Directors for Drug Abuse Resistance Education (DARE). He was elected to the presidency of the Virginia Association of Chiefs of Police and was a long-time member of the International Association of Chiefs of Police. Described as tough but compassionate, he loved every minute of being a police officer and devoted his life to public safety. In an interview, he was quoted as saying, "There's more to law enforcement than arresting people and enforcing the law. You can also help people in the distressful times of their lives ... a worthwhile endeavor." For many years, he was a member of the Arlington Lions Club, the Central United Methodist Church, and upon retirement, he volunteered as a board member for the Salvation Army in Arlington. He is remembered by his bereaved family as a man who loved them immeasurably. He was and will remain unforgettable to all who knew him. Chief Stover's funeral will be held at the Ft. Myer Chapel on April 30, followed by military honors and interment in the Arlington National Cemetery Columbarium. Chief Stover's funeral will be held at the Ft. Myer Chapel on April 30, followed by military honors and interment in the Arlington National Cemetery Columbarium.
Published by The Washington Post on Apr. 17, 2021.
To plant trees in memory, please visit the Sympathy Store.
MEMORIAL EVENTS
To offer your sympathy during this difficult time, you can now have memorial trees planted in a National Forest in memory of your loved one.
MAKE A DONATION
MEMORIES & CONDOLENCES
0 Entries
Be the first to post a memory or condolences.