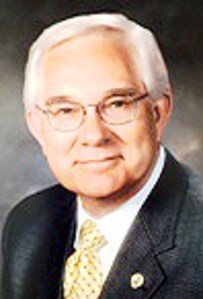 James Nello Martin, Jr., MD, age 74, longtime resident of Jackson, Mississippi and recent resident of Winston-Salem, North Carolina, died peacefully at home on Friday, September 10, surrounded by his family. His was a life of kindness, service and love. As a husband, father, grandfather, brother, mentor and friend, he followed the example of his own father in the practices of attentive listening, respectful speaking, patience, prayer for guidance, and humor in just the right dose.

Educated in public schools close to the naval bases where his father served during his growing up years, Jim was a 1969 Cum Laude graduate of Wake Forest University, where he met his wife, the former Gloria Howard. Marrying five days before he began medical school at UNC Chapel Hill, Jim's subsequent residency training in Obstetrics and Gynecology included three years in Chapel Hill and a year in Stockholm, Sweden on a World Health Organization Fellowship. He then completed a two-year sub-specialty Fellowship in Maternal-Fetal Medicine at Parkland Hospital in Dallas (University of Texas Southwestern). His first academic appointment took the young couple and two small children to the University of Michigan in Ann Arbor for two years, and then they made their way to Jackson, Mississippi in July of 1981, where Jim served on the faculty of the University of Mississippi Medical Center until December of 2014, later serving as Professor Emeritus. Upon the move to Winston Salem, he served as Adjunct Professor of OBGYN at Wake Forest Baptist, teaching via Zoom.

As a Maternal-Fetal Medicine (MFM) specialist, Jim served the field of women's health for 48 years through his role as a clinical researcher and author, as a teacher of medical students, residents and MFM fellows, and as a leader in OBGYN organizations. He served on the Boards of the International Federation of Gynecologists and Obstetricians (FIGO), the American College of Obstetricians and Gynecologists (ACOG), and the Society for Maternal and Fetal Medicine, including terms as President of each of the latter two national organizations. He was founding President of the North American Society for the Study of Hypertension in Pregnancy. He was a Fellow ad eundem of the Royal College of Obstetricians and Gynecologists. While grateful for the numerous awards received, Jim Martin simply sought to serve God and his patients through the calling which brought him much delight. He valued enormously the relationships forged in the delivery room, the seminar room, live and virtual lecture halls and meeting rooms, and in hospital hallways, finding those interactions a source of joy and a path toward his goal of the highest quality of attention and care for every expectant mother.

Among Jim's greatest joys were family time at home or traveling with Gloria, interacting with his children and grandchildren and siblings, conversations with friends, and working to tend the landscape surrounding the family home in Jackson. Always up before sunrise, he could hardly wait to get outside at first light to see what was blooming and what needed a little help.

As a longtime member of Northminster Baptist Church, where he found cherished friends, Jim served three terms as Deacon, including two terms as Chair, and was a faithful member of the Mary Foose Sunday School Class. When Jim and Gloria moved to Arbor Acres Retirement Community in Winston-Salem at the end of 2020, there were more friendships to enjoy, and more times with grandchildren to savor.

A memorial service will be held in the sanctuary of Northminster Baptist Church in Jackson on Saturday, September 25, at 10:00 AM CDT (11:00 EDT). Out of respect for the health care workers responding to COVID-19, the gathering will be for family only. However, friends are invited to gather safely in your other places and join the livestream, found at www.northminsterbaptist.org, under the "Watch Live" link.

425 Northpark Dr., Ridgeland, MS 39157
Published by Winston-Salem Journal on Sep. 19, 2021.
To plant trees in memory, please visit the Sympathy Store.
MEMORIAL EVENTS
Sep
25
Memorial service
10:00a.m.
Northminster Baptist Church
www.northminsterbaptist.org , under the "Watch Live" link, Jackson, MS
Funeral services provided by:
Sebrell Funeral Home
MAKE A DONATION
MEMORIES & CONDOLENCES
Sponsored by Sebrell Funeral Home.
2 Entries
It is with tremendous sorrow that we have experienced the loss of such a wonderful person, a colleague, and a leader. We wish Gloria and all of the family peace in this difficult time. Jim has impacted so many individuals and I know the entire ACOG community misses Jim and will forever value his leadership, mentorship, and friendship.
Rita Driggers and Chris Zahn
September 25, 2021
May the love of friends and family carry you through your grief, and find comfort from knowing that God draws close to the broken-hearted.
T. D.
September 20, 2021
Showing 1 - 2 of 2 results