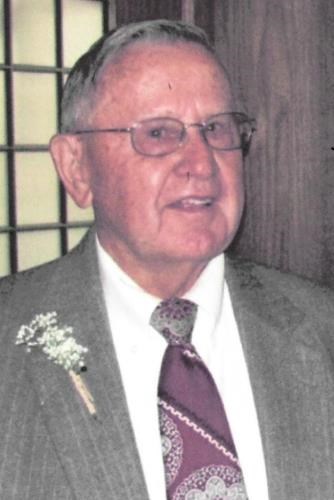 Gene was active in St. Paul's Lutheran Church, the Greenwood VFW, and he served two terms as the Village of West Baraboo Trustee.

He was awarded several medals for his time served in the U.S. Marine Corps. He served during the Korean War and was awarded a service medal with 3-star, National Defense medal, and the United Nations medal.

Gene was an avid gardener; he grew the best tomatoes around and shared them with everyone. He always had the most pristine lawn that was hard to match. He loved spending time with family and friends.

He worked at Alliant Energy for the majority of his career until he retired. Gene worked part-time at Walmart for several years. He then started his own lawn mowing service, running it up until last summer.

Gene will be missed dearly by family and friends. In lieu of flowers, memorials can be made to St. Paul's Lutheran Church, Baraboo, or the Greenwood VFW.

A funeral service is being held on Tuesday, May 18 at 11 a.m. at ST. PAUL'S LUTHERAN CHURCH in Baraboo. Visitation will take place from 9 a.m. Tuesday until the time of the service at the church. Interment and military honors will take place at Walnut Hill Cemetery following the service. The Redlin Funeral Home is assisting the family.

To plant trees in memory, please visit our Sympathy Store.
Published by WiscNews.com on May 17, 2021.
MEMORIAL EVENTS
May
18
Visitation
9:00a.m. - 11:00a.m.
ST. PAUL'S LUTHERAN CHURCH
, Baraboo, WI
May
18
Funeral service
11:00a.m.
ST. PAUL'S LUTHERAN CHURCH
, Baraboo, WI
Funeral services provided by:
Redlin Funeral Home Inc
MAKE A DONATION
MEMORIES & CONDOLENCES
Sponsored by Redlin Funeral Home Inc.
4 Entries
My deepest sympathies to Gene;s family. He was one of the finest people that i ever worked!!
Ron Jasper
May 20, 2021
Deb and I offer our condolences to the entire Fenske family.
Kent Ritchie
May 18, 2021
I've watched him for 26 years as an employee of GLW elementary school. I always admired how beautiful his lawn was and saw him walking most days. I was really touched by his passing although I never personally met him. What a wonderful human being.
Bonnie Nicholson
May 17, 2021
So sorry to here this ! Worked with Gene for 18 yrs ! Great guy ! Helped me thru some heard times in my life! All my prayers to the family !
Jim Patti Pederson
May 17, 2021
Showing 1 - 4 of 4 results