In April 2016, Treasury Secretary Jack Lew announced that Harriet Tubman will be honored on the new $20 bill. Tubman was a legend in her own time, escaping from slavery and returning to rescue dozens of other slaves as a “conductor” of the Underground Railroad. To help preserve the memory of this fearless crusader, here are 10 crucial facts about her life and work.

1. Tubman was born into slavery and endured a horrific life as young girl. She was often sent away from her family, hired out to other households. She was beaten regularly, once so severely that she was left with permanent epilepsy. And her family was broken up, three of her sisters sold to a faraway household and never seen again.

2. Her mother, Rit Green, was an early inspiration to her. After losing three daughters to the slave trade, Green received word that her youngest son, Moses, was also going to be sold. She hid the boy for a month, and when the plantation owner and a slave trader came to take him, Green yelled out, “You are after my son; but the first man that comes into my house, I will split his head open.” The sale was cancelled, and Tubman learned a valuable lesson about the power of resistance.

3. Tubman's first escape attempt was a bust – her two brothers, with whom she ran, decided to go back and insisted that she go with them. The second time, she went alone, relying on brave strangers who smuggled her from Maryland via the Underground Railroad. Her entrance into the free state of Pennsylvania felt magical, she later recalled: “There was such a glory over everything; the sun came like gold through the trees, and over the fields, and I felt like I was in Heaven.”

4. Soon after she arrived in Pennsylvania, Tubman began missing her family. This homesickness was the spark that turned her into a freedom fighter. She helped a niece escape, moved on to free her brother Moses, and was soon helping non-family members find their freedom too. As she ferried more than 70 escaped slaves through the Underground Railroad over the course of many journeys back to Maryland, Tubman was particularly proud of the fact that she “never lost a passenger.” Sometimes this required force. The terror of being caught made some refugees want to give up and return to captivity. Tubman had to keep them with the group for everyone's safety, and she wasn't above threatening them with the gun she carried for self-defense. 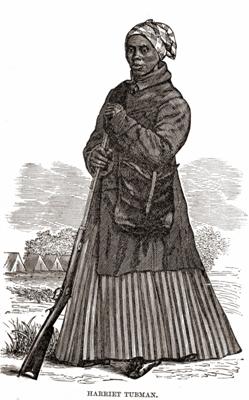 5. Two of the last slaves she rescued from Maryland were her parents. Once they were free and in the north, Tubman's parents began helping escaped slaves themselves, paying forward their daughter's good work.

6. Though Tubman was married twice, she didn't have any children… or maybe she did. One of her “rescues” was of a young girl named Margaret who was apparently living happily with free parents in Maryland. No one could explain why Tubman would separate Margaret from her family when slavery wasn't involved, but it was noted that there was more than a passing resemblance between Tubman and the girl. There has been much speculation that Margaret was Tubman's daughter.

7. When the Civil War began, Tubman worked right alongside the Union soldiers to fight for northern victory. She served as a nurse and a scout, and she assisted with a raid on a group of plantations, during which more than 700 slaves were freed.

8. After the Civil War was won and slavery ended, Tubman turned her activism toward women's rights. She worked with Susan B. Anthony and others to further the cause of women's suffrage.

9. Though Tubman was widely known and admired during her lifetime, she was often poor, even penniless. She didn't receive any compensation for her service to her country during the Civil War, and the consequence of all the time she spent on humanitarian work was that she had little time to devote to a paying job. To make matters worse, she lost $2,000 to con men in 1873 – the equivalent of more than $50,000 today.

10. In 1903, Tubman donated a piece of her land to the AME Zion Church, to be used to build a home for “aged and indigent colored people.” Eight years later, her health had failed so drastically that she had to be admitted to the Harriet Tubman Home for the Aged. On March 10, 1913, Tubman died there of pneumonia, aged 93. Her fascinating journey had come to an end, but her legacy endures even a century after her death. Harriet Tubman remains an American icon of freedom.