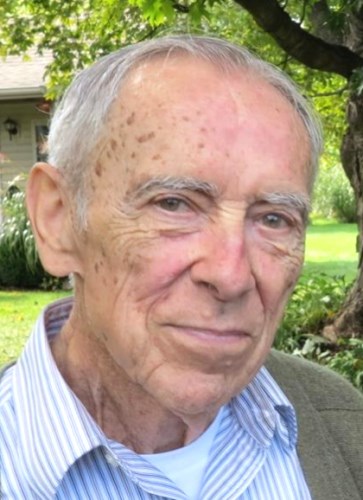 Arlington, VT. David Lloyd Thomas, Sr., of Arlington, Vermont and of Massachusetts, passed away peacefully at home after a brief illness on March 2, 2020. He was 92. Born in Ames, Iowa, he was the son of Mary Freda (Weeks) Marshall and E. Anson Thomas. He is survived by his wife of 24 years Patricia (Thorne) Thomas, his son David L. Thomas, Jr. and wife Dr. Kathryn Hayward of Mallorca, Spain, his daughter Carol Jean Thomas and husband Marty Jacobs of Needham, Massachusetts, his grandchildren Jeremy Hayward-Thomas and wife Maria Carreno Perez of Mallorca, Spain, Samuel Thomas Jacobs of Albuquerque, New Mexico, Michael Thomas Jacobs and wife Cheng Ma of Chestnut Hill, Massachusetts, and Hilaria Baldwin and husband Alec of New York City, and seven great-grandchildren. He is also survived by Patricia's son Evan Germeles of Wyoming, and Patricia's daughter Dr. Christina Herold, husband Kenneth and grandson Teddy of Needham, MA. David was predeceased in 1994 by his cherished first wife Mary Lou (Artman), the mother of his two children, and by his brother, John W. Thomas.

Fondly known by family members as "DL", David enlisted at age 17 in the U.S. Navy at the very end of WW II, too late to be deployed overseas. Upon returning home to Nebraska after discharge, he married his high school sweetheart, Mary Lou (affectionately known as "ML") on September 1, 1946. They graduated from the University of Nebraska shortly after the birth of David Jr. and, prompted by David's first East Coast job in a management-training program at General Electric, (GE) moved to Syracuse, NY in July 1949, where their daughter Carol was born.

In 1954, the family moved to Schenectady, NY where David became a GE traveling auditor for GE, traveling extensively within the U.S. and to Argentina on audits. A few years later, he took his family to Argentina to visit places where David had lived and worked, an experience which instilled in his children a curiosity about the wider world and inspired them to become proficient in the Spanish language.

In 1959, the family moved from Schenectady to Scarsdale, NY, when David began working as a corporate financial officer, first at McCall's and later at General Dynamics in NYC. In 1971, he joined Dun and Bradstreet Corporation, from which he retired as Sr. VP-Finance in 1982 at the age of 55, to pursue his many other interests.

Early in their marriage, David and Mary Lou had traveled to Arlington, VT in search of genealogical roots. They discovered that David's family presence in that part of Vermont pre-dated the American Revolution. They purchased a summer cottage and later an old farmhouse in East Arlington. Upon retirement from jobs in NYC, they made Arlington their home.

David was an avid reader and student of American history and an appreciator of Vermont history and American antiques. In 1984 he purchased an old Boston business that specialized in handcrafted and antique silver. From Arlington, DL continued to run that business, enjoying the connections it brought him with others knowledgeable and interested in American antiques. He loved planning and planting his vegetable garden each Memorial Day weekend, and tending it through harvest time, involving his children and grandchildren in the annual ritual.

In Vermont both David and Mary Lou participated in community activities. David was a trustee of the Bennington Museum (1983-1994 and Trustee Emeritus) and of the Vermont Historical Society (1988-1994.) David and Mary Lou devoted much time and effort to preserving, building, and curating the Russell Vermontiana Collection, now housed at the Martha Canfield Library in Arlington. Until recent years, David served on the Board of the Martha Canfield Library and was one of the founders of the Arlington Townscape Association, which was responsible for a book about the history of Arlington. In his various volunteer endeavors, David's sense of humor and congeniality, as well as his financial expertise, were appreciated by those who worked with him.

In 1995 he married Patricia, of Litchfield, CT, who shared his interests in antiques, history and reading. For a number of years they maintained a home in Litchfield, having great fun restoring an antique house there, but more recently moved to the Boston area to be closer to family, while continuing to spend time in Arlington.

A memorial celebration will be held in Arlington, Vermont at a later date. The family looks forward to greeting those who knew David and would like to honor his memory and celebrate his life along with them. Expressions of sympathy may include a donation in David's memory to The Martha Canfield Library, P.O. Box 267, Arlington, VT 05250, earmarked for the "Russell Vermontiana Collection".
Published by The Bennington Banner on Apr. 3, 2020.
To plant trees in memory, please visit the Sympathy Store.
MEMORIAL EVENTS
To offer your sympathy during this difficult time, you can now have memorial trees planted in a National Forest in memory of your loved one.
MAKE A DONATION
MEMORIES & CONDOLENCES
Sponsored by BenningtonBanner.com.
0 Entries
Be the first to post a memory or condolences.