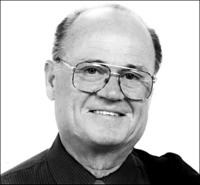 FUNERAL HOME
DeVito Funeral Home
1145 Massachusetts Avenue
Arlington, MA
Cusack, John F. "Jack" Former State Rep. and longtime Arlington resident, passed away on Sept. 11, 2014. Son of the late Gerald J. and Frances Marie Cusack. Jack is survived by his loving wife Janet Cusack and his children Sonya McCafferty and Neil of Durham,NH, Meg Tabacsko and Michael of Nashua, NH, John Cusack and Dolores of North Andover, Kim Compagnone and Frank of FL and Kacey Cusack D'Amico and Michael of Watertown. Jack is also survived by his 15 grandchildren, his 3 great-grandchildren and his sisters Maryann Cusack Connors and Rick and Jane Dicenzo and Paul. Relatives and Friends are invited to attend a celebration of Jack's life on Sunday Oct. 5, 2014 at 6 pm. in St. Agnes Church, Arlington. In lieu of flowers, donations in Jack's memory may be made to the Sawtelle Family Hospice House at VNA of Middlesex- East 607 North Avenue, Ste. 17, Wakefield, MA 01880. www.devitofuneralhomes.com

Published by Boston Globe from Sep. 13 to Oct. 3, 2014.
To plant trees in memory, please visit the Sympathy Store.
MEMORIAL EVENTS
Oct
5
Celebration of Life
6:00p.m.
St. Agnes Church
Arlington, MA
Funeral services provided by:
DeVito Funeral Home
MAKE A DONATION
MEMORIES & CONDOLENCES
8 Entries
Becky
August 24, 2017
I taught at Xavier High School during Jack's years there as hockey coach. He was a role model for the players and all of the students as well. He loved hockey, instilled this love in his players, and challenged them to excel. All Xavier alumni recall those days in the 1960s as golden memories. Jack Cusack was an integral part of these memories.
My warmest prayers and love go out to his wife and family. Jack was a man for others in the true Jesuit tradition.

With affection, Charles M. Hegarty
September 30, 2014
So sorry for your loss to all the cusack family.
Jessica Landry and family
September 23, 2014
To the Cusack Family,

Please accept my deepest sympathies. You are in my thoughts and prayers.