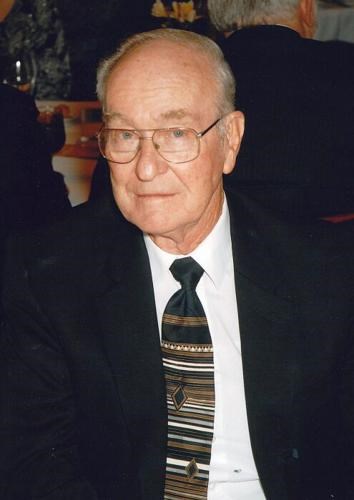 Mack died on Saturday, July 3, 2021. Mack was born on July 12, 1932 in Washington County, Georgia. He grew up in Sandersville, Georgia, leaving to join the Navy at the age of 17. After being discharged from the service in 1953, he attended college in Bowling Green, OH for one year before moving to Dallas, TX to marry his sweetheart, Peggy Joyce Harper. They were married on September 27, 1954, and after a brief time in Dallas, settled in Euless, Texas to raise a family. Mack was always determined and worked and went to school at the same time, graduating from Southern Methodist University in 1973.

Mack had a long and successful career as an insurance agent. He worked for Republic Insurance and the Insurance Placement Board of Texas before opening his own agency with Peggy in 1984. He loved his career and the relationships he formed with his peers and clients. He also served his communities as a member of the Lions Club, both in Euless and as a member of the Park Cities Lions Club in Dallas. He and Peggy loved to travel, taking their children camping throughout the U.S., and traveling together internationally regularly.

One of Mack's favorite destinations became his fishing trips to Brazil. He was an avid fisherman and enjoyed fishing whether on the Amazon River, lakes in Texas, or the ponds right outside his door on his land near Lake Tawakoni. In his retirement in Wills Point, he also loved working on his land and his pet cows, returning to his farm boy roots.

Mack will be sorely missed by all the people who love him. He is survived by his three children and their spouses, Stan Waller and wife Debbie Waller of Euless, Texas, Russell Waller and wife Linda of Wills Point, and Colleen Waller and husband Lyman Grant of Harrisonburg, Virginia. He is also survived by his companion Lucy Hill of Wills Point, and his baby sister Emma Rogers of Milledgeville, Ga. Mack's legacy lives on through his grandchildren, Christopher Ray Waller, Sarah Waller, Jessica Waller, William Grant, Jacob Grant, and Theodore Grant, as well as his great-grandchildren, Landon and Lincoln Waller, Joshua and Hollis Craddock, and Shane and Madison Marshall. He also leaves behind cousins, nieces and nephews, and many friends who will miss him.

Mack was blessed by good health until a stroke in 2014, and even then did not let it slow him down until he experienced health challenges this last year. The family would like to thank the genuine care and support provided to him by all the staff at Three Forks of Forney, particularly Dakota, Tony and Wendy, his physical therapist Dana, and the staff at Dignity Hospice who helped him be more comfortable in his final days.

In lieu of flowers, the family requests that donations be made in his memory to the Lion's Club sponsored Camp Burnett, which provides opportunities for children and youth from the city to get outside and fish and explore the great outdoors, something he loved to do. Checks should be made payable to Camp Burnett. They can be mailed to: Ernest Koestner, Park Cities Lion Club, 2337 Penrose Drive, Mesquite, Texas 75150.
Published by Hiett's LyBrand Funeral Home on Jul. 30, 2021.
To plant trees in memory, please visit the Sympathy Store.
MEMORIAL EVENTS
To offer your sympathy during this difficult time, you can now have memorial trees planted in a National Forest in memory of your loved one.
Funeral services provided by:
Hiett's LyBrand Funeral Home
MEMORIES & CONDOLENCES
0 Entries
Be the first to post a memory or condolences.