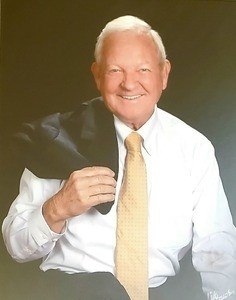 BORN
1939
DIED
2021
FUNERAL HOME
J.T. Morriss & Son Funeral Home and Cremation Services - Petersburg Chapel
103 S Adams St
Petersburg, VA
ELDER, Ronald Thomas, Sr., 82, of Petersburg, Va., passed away peacefully at his home on Sunday, June 20, 2021. He was preceded in death by his parents, Edward and Lelia Elder; and his loving wife of 47 years, Kathryn Wright Elder. He is survived by his sons, R. Thomas Elder Jr. and wife, Sonyia, Charles A. Elder and girlfriend, Cheryl; grandchildren, Brett, Jake, Kailey, Elliss and Raina Elder; sister, Carol Elder Langford; brother, Edward Marshall Elder Sr.; half-brother, John C. Holmes; as well as numerous extended family and friends. Ronnie was born in his home at 626 Wesley Street, Petersburg, at 12:04 a.m. January 1, 1939. He started working at eight years old delivering groceries on his bicycle. He graduated from Petersburg High School in 1956, where he played trumpet in the marching band. He was a faithful member of Christ & Grace Episcopal Church, where he served on the vestry. Ronnie was fascinated with cars and racing at an early age. He was the car owner of Lennie Pond's #1VA late-model sportsman state championship winning racecar in the early 1970s. In 1972, Richard Petty convinced Ronnie and Lennie to move up to the NASCAR Winston Cup racing series. Lennie won Rookie of the Year honors in 1973 and was the winner of the 1978 Talladega 500. Ronnie founded Virginia Concrete Construction Company in 1966 at the age of 27 and worked there the remainder of his life (he might have been restoring cars the last several years instead of working though). He was also involved in land development and had other businesses related to the construction field. He provided excellent care for his wife, Kathie, the love of his life, who had multiple sclerosis. After his diagnosis of multiple myeloma in 2012, he received excellent care from VCU Massey Cancer Centers at Stony Point and Richmond Downtown. Ronnie and his family are very grateful for the care he received from Gail, Mary, Nancy and the staff at Crater Community Hospice. The family will receive friends Tuesday, June 22, 2021 from 5 to 7 p.m. at J.T. Morriss & Son Funeral Home Petersburg Chapel, 103 S. Adams St. Petersburg, Va. 23803. A funeral service will be held Wednesday, June 23, 2021, 11 a.m. at Christ & Grace Episcopal Church, 1545 S. Sycamore St., Petersburg, Va. 23805. Interment will follow in Blandford Cemetery. In lieu of flowers, contributions can be made in honor of Ronnie to the VCU Massey Cancer Centers, P.O. Box 843042 Richmond, Va. 23284 or Crater Community Hospice, Inc., 3916 S. Crater Rd., Petersburg, Va. 23805. Condolences may be registered online at jtmorriss.com.

To plant trees in memory, please visit our Sympathy Store.
Published by Richmond Times-Dispatch on Jun. 22, 2021.
MEMORIAL EVENTS
Jun
22
Visitation
5:00p.m. - 7:00p.m.
J.T. Morriss & Son Funeral Home and Cremation Services - Petersburg Chapel
103 S Adams St, Petersburg, VA
Jun
23
Funeral service
11:00a.m.
Christ & Grace Episcopal Church
1545 S. Sycamore St, Petersburg, VA
Funeral services provided by:
J.T. Morriss & Son Funeral Home and Cremation Services - Petersburg Chapel
MAKE A DONATION
MEMORIES & CONDOLENCES
Sponsored by J.T. Morriss & Son Funeral Home and Cremation Services - Petersburg Chapel.
6 Entries
Just learned of your Dad´s passing. I remember what a nice man he was and what wonderful care he took of Kathie. So sad for all of your family, I know he will missed every day.. Prayers, Jane Badin Shackelford
Jane Badin Shackelford
Friend
June 30, 2021
Dear Tommy and family. Jay called to tell me of your fathers passing. So sorry to hear this sad news. Ronnie always had a smile on his face even when he was going through some though times in his life. He loved your mother and he loved his sons. Family was very important to him. You are very fortunate to have had him in your life for so many years. Loved the slide show that is on this website. This family can certainly feel and understand the sadness in your hearts, because as you know, we have just been through this painful loss. Hold on to all the great memories and love in your hearts and minds and it does help you get through the days ahead. Without loving someone, there can not be sorrow. You all are in our prayers. Take one day at a time and you will get through it. My love to you and family. Margaret Ann Bergen
Margaret Ann Bergen
June 28, 2021
My prayers for Tommie and family in the loss of your father. Find comfort in God´s peace.
Michael Briddell
Work
June 23, 2021
we were boys together, fascinated by fine automobiles and good women. We never grew up.
Lowell
June 22, 2021
Rest in peace Ronnie from Neal and Jamie of Quality Machine.
Neal Johnson
June 22, 2021
Rest in peace Ronnie
Lisa Bess
Friend
June 22, 2021
Showing 1 - 6 of 6 results