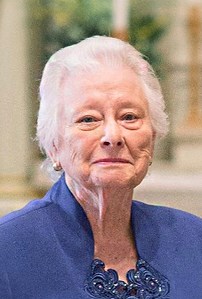 Peggy Clark, 92, passed away peacefully at Salemtowne Retirement Community following several years of declining health. She was born in Savannah, GA to the late James Henry and Mae McIntyre Cunningham and was their only child. Her father passed away unexpectedly during the Great Depression, causing significant changes in her life. She was sent to live with her aunt and uncle, Ann and Monty Scott, in Kingstree, SC while her mother remained in Savannah and worked at the YMCA. Kingstree was much different than Savannah. It was a small, one-stoplight town where Peggy said the grocery store sold live chickens in brown bags with a hole cut in the top. Peggy graduated from Kingstree High School and then enrolled at Winthrop College, in Rockhill, SC, where she received a BS degree in 1950.

During her teenage years she learned to sew out of necessity and carried this skill her entire life. At the time she attended, Winthrop was a female teacher's college. Peggy paid her way through school mending the coeds' uniforms. She lovingly joked that most of the time she was letting them out. She said that the freshman fifteen paid her way through college. She continued to sew throughout her life, making Halloween costumes and doll clothes for her granddaughter's Barbies.

After graduating, Peggy moved to Winston-Salem, NC where she taught in the public schools. She met her husband, John, shortly after arriving in Winston-Salem and they were married in 1951. John worked for Sears Roebuck and they spent the next several years traveling around the South opening Sears stores. They added a son to the family at each town they moved to: Tuscaloosa, AL, Hattiesburg, MS, and Anderson, SC. They moved back to Winston-Salem in 1965 where John eventually finished his career with Sears.

Both Peggy and John were faithful and active members of St. Paul's Episcopal Church. Peggy was also active in the community serving on the Salvation Army Board, Alzheimer's Support Group, Triad Retired Officers' Association, and the Spade and Trowel Garden Club. Having three sons, she was very active in both the Cub and Boy Scouts. Peggy and John served on the Board of Visitors of the Kanuga Conference Center, an Episcopal retreat center in the NC mountains, for many years.

As the family grew with the additions of spouses and grandchildren, a family beach trip became an annual tradition. Many years were spent at Holden Beach, NC and later at Isle of Palms, SC. Peggy loved cooking for the large gathering and watching her grandchildren grow up. Her Mississippi mud pies, lemon bars, chocolate chip cookies, and her world famous iced tea were beloved by all her children and grandchildren.

Once her last son went off to college, Peggy began a new career as the office manager for the J. D. Clark Construction Company, a specialty construction company owned by her eldest son, Dev. She did whatever needed to be done and continued the work into her 80's.

Memorials can be sent to Kanuga Conferences, 130 Kanuga Chapel Drive, Hendersonville, NC 28739 or a charity of your choice.

An in-person memorial service will be held on Wednesday, May 26th at 2:00 at St. Paul's Episcopal Church, Winston-Salem. Masks are requested to allow immunocompromised, unvaccinated people to be in attendance. Following the service, a reception will be held at the home of Robert and Debbie Clark, 2815 Country Club Road. Condolences may be made online at www.salemfh.com.

120 S. Main St., Winston-Salem, NC 27101
Published by Winston-Salem Journal from May 19 to May 24, 2021.
To plant trees in memory, please visit our Sympathy Store.
MEMORIAL EVENTS
May
26
Memorial service
2:00p.m.
St. Paul’s Episcopal Church
520 Summit Street, Winston-, NC
Funeral services provided by:
Salem Funerals & Cremations - Downtown
MAKE A DONATION
Please consider a donation as requested by the family.
MEMORIES & CONDOLENCES
Sponsored by Salem Funerals & Cremations - Downtown.
3 Entries
Robert, My sincere sympathy to you and your family at the passing of your Mother. May your wonderful memories comfort you in your loss.
Sandra Nash
May 19, 2021
I didn´t know your Mother, Robert, but I knew your Father very well. I know this is a huge loss for your family, and I extend my deepest sympathy to all of you. May God bless you and comfort you all.
Cathy Marion (and Derek)
May 19, 2021
Robert, I am sorry to learn of the death of your sweet mother. So many memories of her and John living on Bartram Rd. What I remember most was her kindness to everyone. No doubt she was proud of you and all of your accomplishments. Thinking of you and your extended family.
John Davis
May 19, 2021
Showing 1 - 3 of 3 results