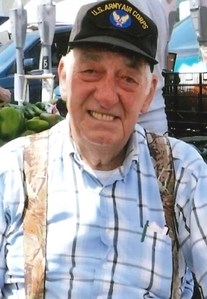 George Albert Cason Sr. passed peacefully at his home in Bybee, Virginia on Tuesday, February 2, 2021 at the age of 89. He was born October 3, 1931 in the Pantops area of Albemarle County, as the seventh son of Mary Lee Pittman Cason and Leonard Ezra Cason Sr.

He was preceded in death by his wife of 69 years, Hazel J. Cason, son Richard Cason Sr.; grandson, Tommy Holland, and his six brothers. He is survived by his three remaining children, George A. Cason Jr., Jacqueline Cason Cornachio, and Hazel "Patty" Cason Holland; ten grandchildren; 23 great-grandchildren; his sister, Nancy Roberts; and many nieces and nephews.

George was a loving and generous father, grandfather, and great-grandfather who was always quick with a joke or funny story. He always maintained a positive outlook on life and his influence impacted so many people. He was proudest of his service in the Army Air Corps where he was primarily stationed in Okinawa, Japan, his work to establish the Charlottesville City Market in 1973, and his charitable contributions to Meals on Wheels. George and the other Cason brothers were well-known throughout Charlottesville for hand making wreaths and selling Christmas trees during the holidays. As with the City Market, he was a visionary and started the first outdoor dining on the city's downtown mall with his restaurant "The Muse" now known as Miller's. George worked for Cropp Brothers Real Estate in his younger years and finished his working career with Cason's Landscaping and Nursery, a business he co-owned with his son Richard, for nearly twenty years. He loved spending time in the outdoors, hunting and fishing, vegetable gardening, and interacting with his many friends and customers at the City Market.

Special thanks to Sharon Trader Cason, his daughter-in-law, who lovingly cared for George in his last years.

A memorial service and celebration for family and friends will be held in George's honor at a later date. In lieu of flowers, please send memorial contributions to Hospice of the Piedmont at hopeva.org. Condolences may be sent to the family at www.hillandwood.com.

Published by Daily Progress on Feb. 7, 2021.
To plant trees in memory, please visit our Sympathy Store.
MEMORIAL EVENTS
To offer your sympathy during this difficult time, you can now have memorial trees planted in a National Forest in memory of your loved one.
Funeral services provided by:
Hill & Wood - Charlottesville
MAKE A DONATION
MEMORIES & CONDOLENCES
Sponsored by Hill & Wood - Charlottesville.
9 Entries
So very sorry to hear of Mr. Cason's passing. He will be missed by everyone who had the pleasure of meeting him for he treated everyone as a friend.
Barbara Rogers
February 9, 2021
After I read this to my husband, we were discussing how many people were doing the exact same thing and reminiscing about how wonderful George was! I bought many, many plants from George over the years and at the various locations where he was selling trees and perennials and wonderful plants which were always so very healthy. And he was such a sweetheart! I always looked forward to getting to go see him! Just to soak in his wonderful attitude! One time I had bought a small red azalea from him, which my dog managed to run over and break off after I had it planted. The next time I saw George he asked about the azalea! He remembered what I had bought! So I told him what had happened. He immediately picked up another pot with a red azalea in it and said, "Take this!" I tried to refuse, saying it certainly was not the plant's fault or George's fault that it had been killed but he insisted and that's just one example of how wonderful George was! That azalea has grown quite a bit over the years and I always think of George, especially when it blooms! I also have a weeping cherry tree that I bought from him many years ago and it has become glorious, just as he promised - he said it would become a specimen and it has! He made beautiful wreaths, also! I have been missing going to see him and I'm so sorry to have learned of his death. JMS
Jill Smith
February 8, 2021
George, Very sorry to hear of your loss.
Malon Updike
February 7, 2021
Thank You George For All The Beautiful Christmas Trees,Teaching Me To Drive Your Truck On The Down Town Mall,All The Crazy Blue Tick Hound Talks,Unloading A Few Pumpkin´s As You Said In The Cold Freezing Rain Which Was A Big Box Truck Loaded To The Top Wow So Many Memories.RIP George.Sending Love And Hugs To Family.I Sure Did Love George And Will Keep Him In My Heart
Debbie Bush
February 7, 2021
Jackie, I am so sorry to hear of your dad´s passing. He was a wonderful man who was always smiling. I am praying for you and your family in this loss.
Jaymee Jenkins
February 7, 2021
Passing of a legend. Peace to you all.
Kristel Riddervold
February 7, 2021
Jackie, I use to work with you. I extend my deepest sympathy to you and your family. My thoughts and prayers are with you all.
Rosemary Critzer
February 7, 2021
My thoughts are prayers are with you all.
Jane Seay
February 7, 2021
I am so sorry for your lost . May he Rest In Peace. What a wonderful man he was and I always enjoyed talking with him.
Ronald North ( Pidley )
February 7, 2021
Showing 1 - 9 of 9 results