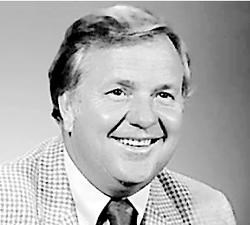 LAUGHTER, Robert Cyrus "Cy" age 86, born on July 26, 1925, of Kettering passed away on Wednesday, September 7, 2011. Cy was a graduate of Oakwood High School, class of 1944, University of Dayton, class of 1946, and Sinclair Community College, class of 1948. He started working at Laughter Corporation in 1946 where he served as Vice-President from 1956-1960 and as President from 1960 until his retirement in 1990. Cy was the founder of Bogie Buster's Golf Tournament and his other professional memberships include the Board of Trustee's at Wright State University, OH Governor's Energy Commission, member of President Ford's Physical Fitness Committee, member of President Nixon's Physical Fitness Committee, member of the National Advisory Committee Small Business Administration, member of the American Battle Monuments Commission, Wendy's Board of Director's, Children's Hospital, Grandview Hospital, Dayton Country Club, Co-Chairman of Bob Hope's Xenia Tornado Fund, NFL Alumni Honorary Board, Federal Home Loan of Cincinnati, Huntington Bank, Department of Air Force Cost Management Advisory Board, Task Force on Women's Minorities, Handicapped in Science and Technology, and the Board of Trustees of Albion College. Cy was enlisted in the US Army-PFC 276 Infantry, Company K 70th Division in 1944. In January of 1945 he was wounded in France and in September of 1945 he was given a Medical Discharge. Preceded in death by his parents, Robert and Gertrude Laughter, daughter Lori Zelik, and brother John "Jack" Edwards. Cy is survived by his wife, Audrey Borkenhagen Laughter; children, David Laughter, and Gretchen McKnight; grandchildren, Carrie Mimnaugh, David and Brittany Laughter, Chris and Casey Zelik, Lyndsey Schneider, Kevin and Michael McKnight; and great-grandchildren, Meredith and Peter Mimnaugh, Clellon Tamme, Lauren Zelik, and Cyrus Laughter. The family will greet friends from 10:00-11:00am on Monday, September 12, 2011 at Good Shepherd Lutheran Church, 901 E. Stroop Rd., Kettering. A funeral service will be following at 11:00am also at the church. Private burial. Gift's in Cy's memory may be made to either Good Shepherd Lutheran Church or to Paralyzed Veterans of America. Condolences may be sent to the family at www.routsong.com.

Published by Dayton Daily News from Sep. 9 to Sep. 11, 2011.
To plant trees in memory, please visit the Sympathy Store.
MEMORIAL EVENTS
To offer your sympathy during this difficult time, you can now have memorial trees planted in a National Forest in memory of your loved one.
MAKE A DONATION
MEMORIES & CONDOLENCES
9 Entries
Audrey, Gretchen, David, and the Laughter family...May your hearts soon be filled with wonderful memories of joyful times together as you celebrate a life well lived. Cy was always around when I was growing up and I will always remember him and your family. God Bless
Cheryl (Cheri) Swarts (Popp)
September 14, 2011
Dear Audrey,David,Gretchen, and all the Laughter family. It is with great sadness to learn of the passing of Cy. It brings back many memories of many years ago. Cy was such a kind and generous person, and I am grateful to him for his help when I was a young man. It was an honor to be named after him, and I was proud to tell people how I got the name Cy... on behalf of myself, John,Trudy, and Larry Winters, our deepest sympathy....Cyrus 'Cy' Winters
September 12, 2011
CY, Hit a few 'rounds' for me up there,Ole' Pal. God bless, Steve Kirk
September 11, 2011
Dear Audrey and Family,
We are so sorry to hear of Cy's passing.
He was so good to Mom (Georgia Winters) when Dad (Ed (Shine)Winters passed away.
Our prayers are with you all at this time. Sincerely, Janet & John Buehler
JANET BUEHLER
September 10, 2011
Dear Audrey and Family----
Cy was very proud of his service to our country. I first met Cy when he stood up to the Oakwood council in support of a local veteran being able to properly display the American flag at his home. He fought and was wounded in combat to protect that right. Enjoyed his friendship during the short time that I knew him. He gave so much for others. Thank you for sharing him with us.
Denver Combs
September 10, 2011
Dear Audrey and Family----
We are so sorry to hear of Cy's passing.
He will be remembered for all the good
things he did in Dayton and the area.
You are in our thoughts and prayers.
Sincerely, Sandy Boyd Gillaspy and Bill
September 10, 2011
Dear Laughter family,
We are so very sorry to hear of Cy's passing. We are grateful we had the opportunity to know him and to work with him several times at the Bogie Busters tournaments. He will be remembered for all the good work that he did for the City of Dayton. You are in our thoughts and prayers.
Sincerely,
The George Hellmund, Jr. Family
George Hellmund
September 9, 2011
Dear Audrey & family,
You have our deepest sympathy on the passing of Cy. He was a friend of everyone that he met. His legacy will remain in the Dayton community for years to come. May God bless you and comfort you in your difficult time of this great loss to your family.
Dick & Mona Hartmann
September 9, 2011
Dear Brittany and Family, I am so sorry for the sudden passing of your Grandfather. I will keep you and your family in my thoughts and prayers during this difficult time. Sincerely, Lorna Whyte
September 9, 2011
Showing 1 - 9 of 9 results