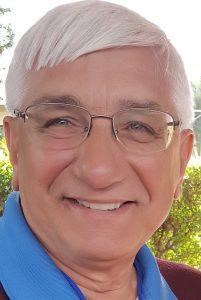 George was born on September 9, 1949 in Fritzlar, Germany. At the age of eight, he came to America along with a sister and aunt to meet up with his mother, two brothers, and sister, who had already established a home in Cincinnati. He came from humble beginnings and carried that throughout his life. George valued a strong work ethic and taught his children the same. He cared greatly for the well-being of those around him. Being a young boy with a thick German accent in post-war America was difficult. He used his experiences as a child to shape his belief that others should not be judged by anything other than their character. April 21, 1975 was a proud day for George as he formally became a US Citizen.

In 1969, while teaching swimming at the girls' summer program at Friars Club, he caught the eyes of a lovely young lifeguard, Terri Albanese. Falling in love at a young age, George and Terri pledged themselves to each other, and were married on July 22, 1972 at St. Monica Church in Clifton.

George worked and volunteered at the Friars Boys' Club, serving as a basketball, baseball, and swimmingcoach. The highlight of his basketball coaching career was winning the Cincinnati City Championship with his team the Friars Elite in 1972. His love of coaching basketball and his many hours of volunteer work earned him The Friars Award in 1979.

George started his career working for Kroger as a manager. After 10 years he decided to start his own business along with a brother-in-law; purchasing a building in Florence, KY. In February of 1985, the Produce Patch opened and became a beloved neighborhood market and deli for over 17 years. After retiring from Produce Patch, George made the decision to return to his first love, teaching; he taught German and Religion classes at St. Henry District High School (SHDHS) for over a decade. He was thrilled to work alongside his daughter Emily and son Eric, both teachers. At SHDHS his many contributions to the students and school earned him the title of a "Crusader Champion".

Not only was George hard-working and successful in business; he gave so much to the community that surrounded him. He and his wife, Terri, were involved in Worldwide Marriage Encounter for over 37 years helping other couples enrich their married lives. He and Terri also ran Pre-Cana classes and Evenings for the Engaged for those getting married in the Catholic faith in the Diocese of Covington and the greater Cincinnati area. George and Terri were a tremendous example of a loving, committed, faith-filled, strong couple. Many looked to George as a mentor as a strong husband and for his wisdom and guidance.

Most of all, George was a loving and caring man who thoroughly enjoyed spending time with his family and friends. He was a father-figure to many and his contagious laugh and infectious smile brightened every room he was in. He loved reading, traveling, praying the rosary, ice cream, and maybe most of all his grand-children; they loved their "Opa" dearly.