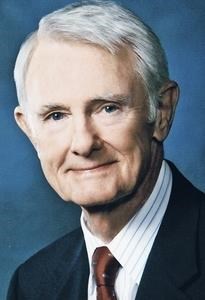 Dick Carson, age 92, passed away peacefully at his home in Studio City, CA on December 19, 2021, in the loving embrace of family, after a brief illness. Richard Charles Carson, was born in Clarinda, IA the youngest of three children of Homer Lloyd "Kit" and Ruth Hook Carson. Most knew him as Dick, and later in life, his beloved granddaughters knew him as Poppy. The Carson family lived in several small Iowa towns before settling in Norfolk, NE as the father's work in the public utilities sector brought increased job responsibilities and advancement to a statewide management level.

It was in Norfolk that Dick attended school until graduation in 1947. He was a popular youth, who loved playing sports, especially basketball. But he also played the trumpet and appeared in high school drama productions. Later, while a student at the University of Nebraska, he acted in productions on campus and in community theatre in Lincoln. He graduated from college in 1952, having majored in speech and radio and being named "Best Announcer" by his National Honorary Radio Fraternity. He also was a member of Phi Gamma Delta Fraternity. He did a summer internship at KGOR Radio in Lincoln, and was Program Director for the University of Nebraska Radio Station.

In July, 1952 Dick wed his High School sweetheart Patricia Ann Gundy, and they were married for 34 years, until her death in 1986. They began their family while Dick served in the United States Navy, being stationed in California, and eventually rearing three children.

A few months after his marriage, he reported to Officers Candidate School in Newport, RI and he took the oath of office as an Ensign, USNR in March of 1953, later attaining the rank of Lieutenant, J.G. He was assigned to the USS Romulus as Operations and Communications Officer until his separation from the Navy in 1956. He then served in the Naval Reserve on inactive duty as a full Lieutenant for an additional 11 years, later being transferred to the Retired Reserve. His Naval service was a source of pride for Dick.

After his naval service ended, Dick and Pat decided to remain in California, and he began work, not in radio, but in a newer medium: television. At San Diego television station, KOGO TV, the local NBC affiliate, he first worked as a "floor man" for local programming and then began directing commercials and local news and sports shows. When a summer job opportunity as a stage manager and associate director for ABC in Los Angeles became available in 1960, he commuted to fill it, and within months, that led to moving his family to the city to take a permanent position directing chidrens' programs including "Chucko the Birthday Clown." He later moved on to directing "The Soupy Sales Show".

When he received a call in 1962 regarding a possible job on the New York-based "Tonight Show", he went to an interview knowing that he had been suggested by the young man who would soon be the star of the show---Johnny Carson. His credits were largely unknown by the interviewer, who, as a courtesy to Johnny, had agreed to have a chat with the performer's younger brother, Dick. He found that the young man had some good directing experience and that he was willing to relocate to New York and begin his new job before Johnny himself began his long career on the show. Dick directed many celebrity guest hosts during the weeks before Johnny was free to begin his tenure. He proved himself to be creative and professional and he was especially skilled at directing musical talent and showing artists at their best. He directed guest authors, actors, politicians, comedians, animal acts, sports figures and the comedy sketches of Johnny himself. He loved being exposed to the outstanding talent of "The Tonight Show" band's musicians, for whom he had great respect and rapport.

Directing "The Tonight Show", then 1¾ hours of unedited live television every weeknight, was both exhilarating and exhausting. Late-night commutes from the city to the family home in suburban Armonk, NY were lengthy, resulting in less time than he wished with his family. After almost seven years, Dick decided to return to California as director of "The Don Rickles Variety Show", which had only a short run. He did free-lance work for a time, directing episodes of Arthur Godfrey's " Your All-American College Show", an award-winning episode of "Get Smart" and "The Sammy Davis Show," as well as commercials and pilots. His resonant announcer's voice brought an audition as host of a quiz show, but he realized that he was more comfortable behind the camera than before it.

Dick was hired as director on "The Merv Griffin Show" in 1972, and continued in that role until Griffin retired in 1986, except for a brief hiatus. That program, which was syndicated, did frequent shows from Las Vegas, and traveled to Paris, Monaco, Venice, and Israel, showcasing a wide array of guests. Griffin's love of tennis created travels to matches abroad with both professional and celebrity players. Before the talk show ended, Dick also began directing Griffin's popular "Wheel of Fortune" game show, which he continued to do for 22 years. until his own retirement. He also directed several years of live New Year's Eve programs for Merv Griffin from Atlantic City after Griffin's talk show ended. In total, Dick's 43-year long career included directing many thosands of television shows. Over the course of that career, he received five Emmy awards

In 1987 Dick was invited by close childhood friends to return to Nebraska as their guest at a golf tournament in Omaha. They arranged for him, a widower, to have a dinner companion on the last night of the tournament. The dinner date proved to be long-lasting: Dick's companion for the evening was Karlyn Kuper, an interior designer in Omaha, whose parents, coincidentally, had been neighbors and friends of Dick's late parents for many years in Columbus, NE, where the senior Carsons had eventually moved. There was a year-long courtship, during which the couple bonded, not only with one another, but also with each other's families and circles of friends. They married and lived in California, but Dick loved spending time back "home" in the midwest, after an absence of decades, and it will be his final resting place.

The family wishes to thank Teri David and Anna Santy, who, during the past several months, brought music and laughter, along with their kind, loving care, to Dick and his family. Memorials are suggested to the Providence St. Joseph Medical Center's Minutes Matter Emergency Services Campaign c/o the Providence Saint Joseph Foundation at 501 S. Buena Vista St. Burbank, CA 91505 or to a charity of donor's choice.

Published by Omaha World-Herald on Jan. 9, 2022.
To plant trees in memory, please visit the Sympathy Store.
MEMORIAL EVENTS
To offer your sympathy during this difficult time, you can now have memorial trees planted in a National Forest in memory of your loved one.
MAKE A DONATION
MEMORIES & CONDOLENCES
4 Entries
Thank you for your Service may you be Granted Steady winds and Calm Seas on your Journey to a Restful Peace
VFW DISTRICT 10 /FRA BRANCH 276 CHAPLAIN
Other
January 10, 2022
Karlyn, it must be such a hard time for you. I know how devoted you were to Dick and I hope this time of grieving can be also a time of renewal. Keep Dick safe in your heart and you'll never be alone. And I miss you.
Nikki Gibbs Serra
January 9, 2022
Thank you for your military service
Marc S
January 9, 2022
We are saddened by Dixie passing, but rejoice in a life well lived. Condolences to Karlyn and family. With love, Arnie and Janet
Arnie Kriegler
January 9, 2022
Showing 1 - 4 of 4 results