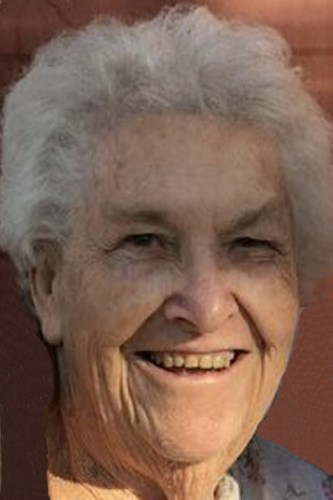 MILLS - In their home in Mills, with the love of her life by her side, June Shirley Curtis Clamp said a temporary goodbye on August 26, 2020.

June was born on June 23, 1927 in the homestead house on her parents' farm in Torrington, Wyoming to George E. Curtis and Lilly Ada (Moore) Curtis.

As the baby of the family, she was spoiled by her older siblings and her parents. What some today would consider a hard life, she had what she thought was a blessed childhood and always spoke of those days fondly. The school bus rides, the manure fights with the neighbor kids, sleeping in a converted feed house with her sister Doris when the family outgrew the tiny homestead house and many more memories were made. At the age of five June fell into a horse drawn farm implement and after the horses were backed up to get her out of the machine, she had suffered a broken leg and several severe injuries to her hip and ankle. Despite this, she remained an active and agile child and throughout her life most did not know that she lived with one leg shorter than the other.

In junior high June met the man she would love for over 77 years, Ray Clamp. June graduated from Torrington High School. After Ray returned from serving in WWII, they were married in Harrisburg, Nebraska on August 5, 1946. They lived in Torrington where Ray began his career as a Brick Mason following in the footsteps of June's Daddy. The following July they were blessed with the birth of Danny Ray. Tragically Danny's life was very short when he died of a virus at only four months of age. A year later Linda was born and after the little family moved to a trailer park in Laramie while Ray worked on the buildings at the University of Wyoming, Sandra and Steve joined the family. After moving across Wyoming with the brick crew for a time the family settled in Mills, first living in a trailer park and then moving to a lot on Platte Street where Curtis was added to the clan. The Clamps then moved to their little white house in upper Mills and in a few years Scott made the group complete.

Some might say that June never was a working Mom but anyone who has cared for five kids under age 14 knows what a foolish statement that is. June busied herself being our Mom. Room mother, attending sports events from baseball to motor-cross races, sewing dresses and Halloween costumes and creating special holidays and family celebrations were just the "norm" that the Clamp kids took for granted and that special benefit was continued for grandchildren and great-grandchildren.

June enjoyed bowling and volleyball and in their retirement years Ray and June traveled in their motorhome to all the states and much of Canada accompanied by Ray's cousin Katy Weakland and June's sister Doris. Long before computer mapping systems, June planned these trips with AAA books and guides. They also took trips to Hawaii and Europe and spent many days trekking around Wyoming's lakes and mountains. Together they shared a full life filled with family and friends.

The family is appreciative of Dr. Lloyd and Mysty, Mom's therapist who helped us keep her with us at home but mostly for the love of our Dad who guarded over her rarely leaving her side in the last years of her life. We know we have been extremely blessed.

Published by Casper Star-Tribune on Aug. 29, 2020.
To plant trees in memory, please visit the Sympathy Store.
MEMORIAL EVENTS
To offer your sympathy during this difficult time, you can now have memorial trees planted in a National Forest in memory of your loved one.
MAKE A DONATION
MEMORIES & CONDOLENCES
5 Entries
Ray & Family, Dean & I, out prayers are with you at this time,
Dean & Jo Olson
September 2, 2020
Very sorry to hear of your loss. Scott was a friend of my brothers (Jim Delaney) we lived in Mills as well. Our mother passed away Janurary 20, 2020 as well as a sister, August 21, 2020. Our prayers are with you in this difficult time. God Bless.
Julie Delaney
August 31, 2020
Hi Papa, This is Mila. I just want to say I am soo sorry about grandma June. I loved her so much.
Mila June
August 30, 2020
I em sorry.
Henry
August 30, 2020
We Loved her so much=›
Peggy clamp
August 29, 2020
Showing 1 - 5 of 5 results