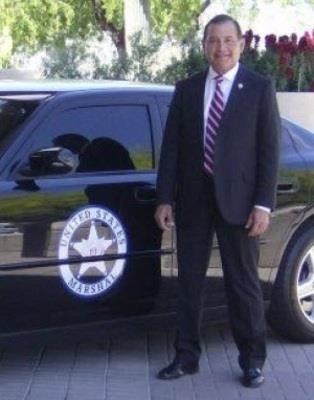 Raymond's most well-known cases include the arrest of Emmett McSwain (listed as a U.S. Marshals Top 15 fugitive), the arrest of Kenneth Allen McDuff ("The Broomstick Killer" serial killer), and the arrest of Paul Cheng (Savings and Loan Embezzler). Raymond was one of the original "Dirty Dozen" who started the Electronic Surveillance Unit, which today is known as the Technical Operations Group. Raymond is also noted for the following contributions to the U.S. Marshals: Organized the first tactical unit in Dallas, TX, Firearms Instructor, fitness in total Coordinator, SES Development Program working group, S.W.A.T. / Sniper certified through eight agencies/schools, JPATS committee member, Office of the Federal Detention Trustee steering committee.

After Raymond's retirement from the USMS, he continued to assist with annual USMS tactical firearms training, organizing the annual Police Olympics, and taught firearms and tactical training to both civilian and law enforcement. Raymond enjoyed taking trips with his loving wife, Barbara. They were both members of the local Corvette Club where they regularly participated in fellowship with other members. Raymond also served on the Board of Directors of Pima Pistol Club and was an avid combat pistol shooter.

Although Raymond was dedicated to serving his country as a U.S. Marshal, he always made time for his family. An unconditionally loving father and grandfather, he will be truly missed by those who were honored to be a part of his life. Services will be held at a later date. Arrangements under the care of VISTOSO FUNERAL HOME.


Published by Arizona Daily Star on Apr. 19, 2020.
To plant trees in memory, please visit the Sympathy Store.
MEMORIAL EVENTS
To offer your sympathy during this difficult time, you can now have memorial trees planted in a National Forest in memory of your loved one.
Funeral services provided by:
Vistoso Funeral Home
MAKE A DONATION
MEMORIES & CONDOLENCES
1 Entry
Ray was always one of my favorite people--a gentleman, a professional, and a great sport in all things. I enjoyed swapping stories with him and it seemed like every time we spoke I learned something fascinating. It was a pleasure to see how happy he was made by the people in his life, especially Barbara. My most enduring memory of him will be his broad grin, as if he knew something truly funny and couldn't wait to share!
Aaron Brudenell
April 19, 2020
Showing 1 - 1 of 1 results