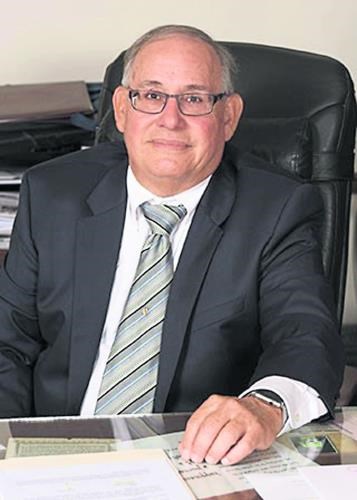 ABOUT
Pottstown High School
FUNERAL HOME
Schumacher and Benner Funeral Home
359 King Street
Pottstown, PA
Thomas L. Hoffman, 70, of Pottstown, passed away on Thursday at Lehigh Valley Hospital. He was married to his childhood sweetheart, Kathryn E. (Davis) Hoffman, for 49 years. Born in Pottstown, PA, he was a son of the late F. Howard Hoffman and the late Joyce L. (Keeler) Hoffman. Tom was born and raised in Pottstown, Pa. He graduated from Pottstown High School in 1968, from Penn State University, with honors, in 1972, and from Villanova University Law School, cum laude, in 1975. Mr. Hoffman also received the Obert Award from Villanova Law School for his work in Corporate Law. He was an attorney in the law firm of Wells, Hoffman, Holloway & Medvesky. Mr. Hoffman has been a member of the firm since 1975, first as an associate, and since 1981 as a partner. He was also active in community and civic organizations and was a Trustee and Solicitor for Trinity Reformed Church in Pottstown. He has served on various Boards including President of the Pottstown Bar Association, Board of Directors of North End Swim Club, Treasurer of the St. Pius X Athletic Association, President of the Pottsgrove Wrestling Club and Treasurer for the Group Workcamp Project which was held in Pottstown in 2000 and 2002. He is a member of the Montgomery County and Pennsylvania Bar Associations. He also was an avid Penn State fan of all sports as well as a Phillies and Eagles fan. Tom was a member of Stichter Lodge #254, Pottstown. Surviving besides his wife is a son, Andrew T. Hoffman and his wife Patricia, Philadelphia; a daughter, Elizabeth Ann wife of Justin DePietropaolo, Downingtown; a sister, Lynn M. wife of Robert Gist, Bechtelsville; and five grandchildren, Abigail, Laina, Luke, Max and Gavin. He was predeceased by a brother, John L. Hoffman. A memorial service will be held 11:00 A.M. on Wednesday September 22, 2021 from Trinity Reformed United Church of Christ, Hanover & King Streets, Pottstown. Officiating will be Reverend Nichole Jackson. The family will receive friends Wednesday from 9:30 to 10:50 A.M. at the church. A masonic service will be held 10:50 A.M. Wednesday at the church. Contributions may be made in his memory to Trinity Reformed United Church of Christ, 60 N. Hanover St., Pottstown, PA 19464. Arrangements are by the Schumacher & Benner Funeral Home & Crematory, at 359 King St. in Pottstown, PA. Our web site exists to serve the friends and family of the deceased. Go to http://www.schumacherandbenner.com to extend sympathies and access additional service details.
Published by The Mercury from Sep. 18 to Sep. 19, 2021.
To plant trees in memory, please visit the Sympathy Store.
MEMORIAL EVENTS
Sep
22
Calling hours
10:00a.m. - 10:45a.m.
Trinity Reformed United Church of Christ
Hanover & King Streets, Pottstown, PA
Sep
22
Memorial service
11:00a.m.
Trinity Reformed United Church of Christ
Hanover & King Streets, Pottstown, PA
Funeral services provided by:
Schumacher and Benner Funeral Home
MAKE A DONATION
MEMORIES & CONDOLENCES
Sponsored by Pottsmerc.com.
5 Entries
I was very sad to hear of Tom's passing. When I was introduced to the Davis family through John and attended functions, he was clearly sensitive to my feelings of insecurity and made a point of engaging me in conversation, in an attempt to put me at ease. He seemed a very friendly, intelligent and considerate man and I will remember the kindness that he showed me. With my sincere condolences to his wife Kathy and his entire family, Jennifer Hulswit
Jennifer Hulswit
September 22, 2021
Very sorry to hear of your loss.
Sue Csencitz
Friend
September 20, 2021
We are so sad & heartbroken about Tom's passing. We really thought he would beat his illness. We lost our attorney, an important member of our church community & a friend. He was such a nice person who we enjoyed talking to whenever we saw him We know that you lost so much more & our hearts ache for you & your family. We want you to know that you & your family are in our thoughts & our prayers are with you during this most difficult time. In Christian Love & Sympathy, Jeanne & Floyd Harkinson
Jeanne & Floyd Harkinson
Friend
September 20, 2021
So sorry to hear of Tom´s passing our thoughts and prayers are with you as you mourn your loss, many fond memories John & Sandy
John Reed
Friend
September 20, 2021
Kathy: I am so sorry to hear about Tom's passing. My prayers are with you and your family at this difficult time.
Betty Borger
September 19, 2021
Showing 1 - 5 of 5 results