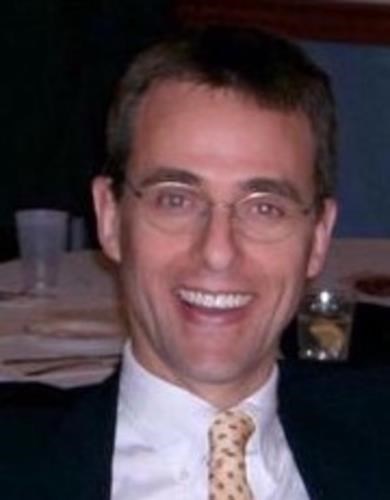 William "Bill" Connick, the youngest child of Robert and Frances Connick, was born and raised in Berkeley, California. He was a Professor in the Department of Chemistry and Director of the Center for Biosensors and Chemical Sensors at the University of Cincinnati. He was regarded as an outstanding scientist, educator, mentor and colleague.
Bill was also the devoted father of Oliver and George (9 and 6 years old) and the loving husband of Marcelle. It was important to Bill to spend time with his sons. He made up math problems for Oliver and tutored George on his numbers and letters. Bill could be very silly as well as serious, and loved playing, joking and goofing around with Marcelle and the boys.
In the summertime, Bill enjoyed camping with his extended family in Northern California. In his 20s, he began a long-term project to plant redwood trees at the family campground, braving poison oak and blackberry bushes to plant seedlings and nurturing them over many years. These trees have grown tall and broad, providing shade for the camp and constitute a legacy that is cherished by his family.
Bill earned his B.A. in Chemistry from Williams College in 1988, M.A. in Chemistry from the University of Cambridge in 1992, and Ph.D. in Chemistry from the California Institute of Technology in 1997. He performed a postdoctoral fellowship at the University of Rochester and then joined the faculty of the University of Cincinnati in 1998. He received a Beckman Young Investigator Award (2001-2004) and a National Science Foundation CAREER Award (2002-2007) for his research focused on cooperative two-electron transfer reactions. He was named an IUPAC Young Observer in 2009, the Cincinnati Section of the American Chemical Society Chemist of the Year in 2014, and Visiting Scholar at the Université de Bordeaux in 2015.
Bill's research impacted diverse areas of science. He was a world expert in multielectron photophysics for energy sustainability. He also developed sensors for the measurement of different targets such as pollutants in ground water and tracing the source of radioactive pollutants in nuclear forensics.
Bill's contributions to science and the education that he provided to the students working with him on these projects will continue to have an impact on our world. Students regarded Bill as an inspirational lecturer in the classroom – funny, enthusiastic, dedicated, and extremely knowledgeable. Bill was awarded a 2018 Faculty Excellence Award for exceptional performance.
Bill is survived by his wife, Marcelle, his sons, George and Oliver, his four sisters – Mary, Liz, Megan and Sarah – and his brother, Arthur.
Published by San Francisco Chronicle from May 25 to May 27, 2018.
To plant trees in memory, please visit the Sympathy Store.
MEMORIAL EVENTS
To offer your sympathy during this difficult time, you can now have memorial trees planted in a National Forest in memory of your loved one.
MAKE A DONATION
MEMORIES & CONDOLENCES
10 Entries
We miss you, Bill. And thank you to the anonymous writer who wrote about the bench last March. It does command a gorgeous view and Bill was very charming, funny, generous, and kind. Rest in peace, dear William.
IWC
Family
April 14, 2021
Hello. I never met William and only learned of his name a few days ago. For 25 years I have walked regularly up in the Berkeley Hills and just the other evening came upon what to me was the new bench, placed in William's honor with his commemorative plaque. I sat upon his bench, taking some quiet time of a magical East Bay evening and, with the sun at my back, was treated to the gorgeous views of glistening San Pablo Dam reservoir. Beyond it, the gentle rolling hills of another East Bay treasure, Briones State Park and, to the south east, Mt Diablo rising majestically and reflecting the peaceful and pink evening light. I wanted to extend my thanks to those that placed the bench and to let you know that it occupies a beautiful space and represents a very welcome opportunity to reflect and appreciate the beauty of the East Bay. If this bench and it's view is anything to go by, I imagine William to be a charming, generous and kind person. I offer my condolences to you and my thanks again for your wonderful gift to a stranger and I'm sure a very fitting memorial. With kind regards, John.
March 16, 2020
An extraordinary man. An extraordinary loss.

- student
July 9, 2018
Miss you, buddy.
June 21, 2018
I was truly devastated upon hearing of the tragic news. I was shocked to say the least. During the Fall semester at UC, Dr. Connick was my inorganic chemistry professor; and on the first day I knew that this would be a class that I would enjoy very much. He would keep the mood light with his stories and jokes, but made sure that his students had a firm grasp on the material being taught. What an extraordinary and kind person. He would always return my smile and greeting with an even bigger smile and warm "Hi." My sincerest condolences to his family.
I. G.
June 6, 2018
I am an ordinary American who did not know this accomplished man; however, when I read his obituary I felt tremendous loss for the Family of Man. Hopefully, his work for all of us will be continued and that his sons someday will carry on his legacy. My condolences to his family.