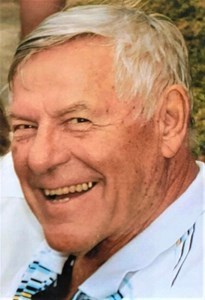 ABOUT
Southport High School
FUNERAL HOME
Newcomer Funeral Home - Indianapolis
925 East Hanna Avenue.
Indianapolis, IN
Richard Lee "Dick" Clapper, 84, passed away Thursday, July 1, 2021. He was born October 25, 1936 at the family home in Greenfield, IN. During his 84 years he accomplished many things.
After he graduated from Southport High School, Dick went into the service station business on the corner of East Street and Raymond Street. Next, he owned 3 coin-op laundries, one of which is still in operation. While he was in the laundry industry, he invented a garment steamer that he also manufactured and sold worldwide.
Following an interest in motorcycles, Dick started two Kawasaki dealerships in Indy. They ranked first in sales in a five state area giving him the rank of Ichiban dealer. His interest in RVs led to the founding of Indy RV located on Pendleton Pike.
Dick started purchasing commercial real estate in the 1970s and, at the time of his death, owned multiple commercial properties. His three sons helped him build a lake on 100 acres of woodland in Martinsville. They later helped him work the three farms he owned in Salem, IN.
Dick loved hunting and he often went with his brother-in-law, Steve Tilson, his favorite teacher from Southport High School, Red Haviland and other friends. After retiring to Florida in the late 1980s, he went fishing almost daily. Additionally, he was an avid bicyclist.
Dick maintained a close relationship with Southport High School. He sponsored two scholarships annually. One was in the Clapper name and the other after his friend, Red Haviland. He also supported many charities including the Salvation Army, St. Jude's, Boy's Town, Wounded Warriors and Tunnels to Towers. Since 1991, he also supported four children each month through World Vision.
Dick is survived by his wife of 64 years, Marsha Tilson Clapper; sons, Mark and David and their spouses; three grandchildren; and many nieces, nephews, great nieces and great-nephews.
A Mass of Christian Burial will be conducted for Dick and his son, Rick, who passed away Saturday, December 26, 2020, on Tuesday, August 3, 2021, at 2 pm at St. Roch Catholic Church, 3600 South Pennsylvania Street, Indianapolis, IN 46227. A celebration of their lives will follow at The Barn at Crystal Spring Farm, 3620 Hurricane Road, Franklin, IN. In lieu of flowers, the family requests that donations be made to the Richard Lee Clapper Foundation, 248 Daffon Drive, Indianapolis, IN 46227. Funds from this foundation will be used to build a home for a wounded veteran.
Please continue to support Dick's family during this difficult time by clicking the "Share Memories" icon above and sharing your memories, thoughts and prayers.
Published by Newcomer Funeral Home - Indianapolis on Jul. 26, 2021.
To plant trees in memory, please visit the Sympathy Store.
MEMORIAL EVENTS
Aug
3
Memorial service
2:00p.m.
St. Roch Catholic Church, 3600 South Pennsylvania Street, Indianapolis, IN 46227
Funeral services provided by:
Newcomer Funeral Home - Indianapolis
MEMORIES & CONDOLENCES
0 Entries
Be the first to post a memory or condolences.